I've written previously about the convergence between still and video cameras and I've finally jumped on the bandwagon. I've been tempted on and off over the past few years by The Panasonic GH5, but the MFT format just didn't appeal to me. I'm too used to full frame sensors and have invested in a lot of glass for the Canon 5DII. That camera has served me well over the years and remains excellent for stills. Its video capabilities however, are lagging way behind the competition — no 4K, no real log mode to speak of (yes, I do use CineStyle) and no slow motion capability.

I had been watching Sony's range of cameras with interest and when they released the A7III earlier this year, it ticked all the boxes. The only problem was it proved so popular that it was hard to get my hands on one. I finally got mine just last week (Oct 2018 at the time of writing). I also bought a Sigma MC-11 Canon to Sony lens adapter so I could use all of my existing lenses.

First impressions are largely good. The build quality of both camera and adapter is good, they lock together solidly. All of my lenses mount easily and autofocus works well, better than on the 5D2 in many cases. Sadly, autofocus is equally bad with the Canon 100-400L f4 on both cameras. I've carried out a few quick video tests which you can view on the video page. This morning, I took a run to Ramelton to shoot a few comparison RAW tests on both cameras.

I used much the same settings for both — 100 ISO, f8 at 1/125 sec. You can view the results below. Use the scrubber to compare. Click here for Jpegs (Canon | Sony) from the unprocessed RAW files. 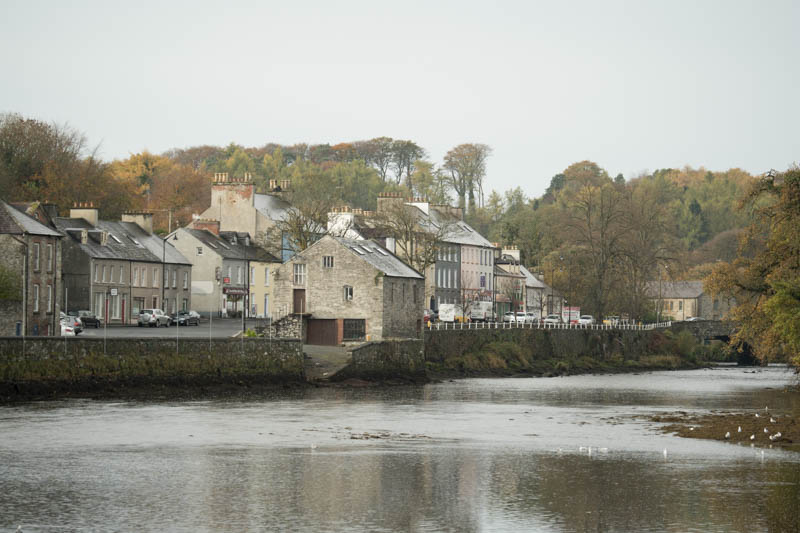 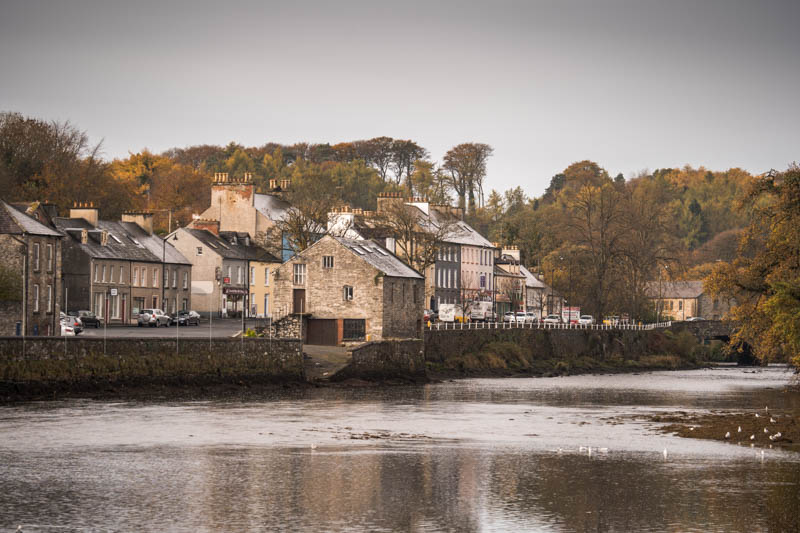 As you can see, the Sony has a pronounced green cast to the RAW file. This required more editing in Lightroom than the Canon RAW. On the other hand, the sharpness is better and the resolution slightly higher (6000 x 4000 vs 5616 × 3744).

As a point of interest, Lightroom 5.7.1, the most up to date version at this time, was unable to recognise the Sony RAW files. Adobe's DNG converter was required to make Digital negatives which could then be imported to Lightroom. Hopefully this will be resolved in a future update. Soon, please Adobe! The A7III has been on the market for months now. 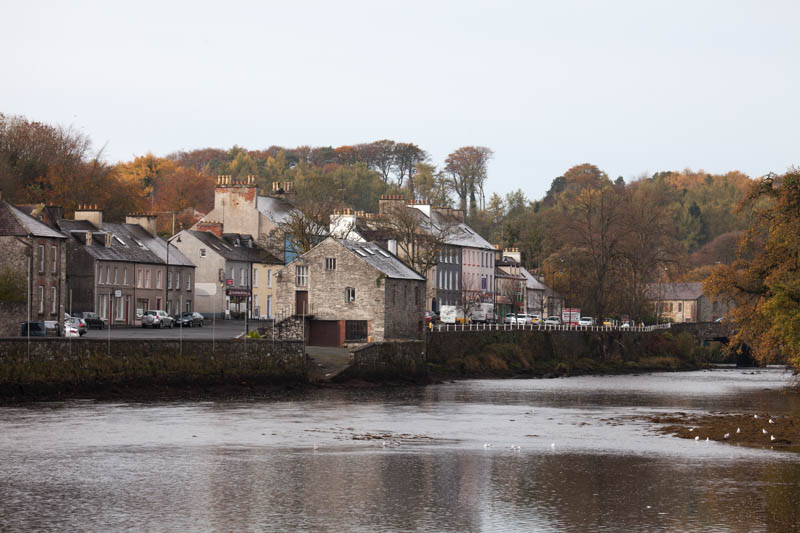 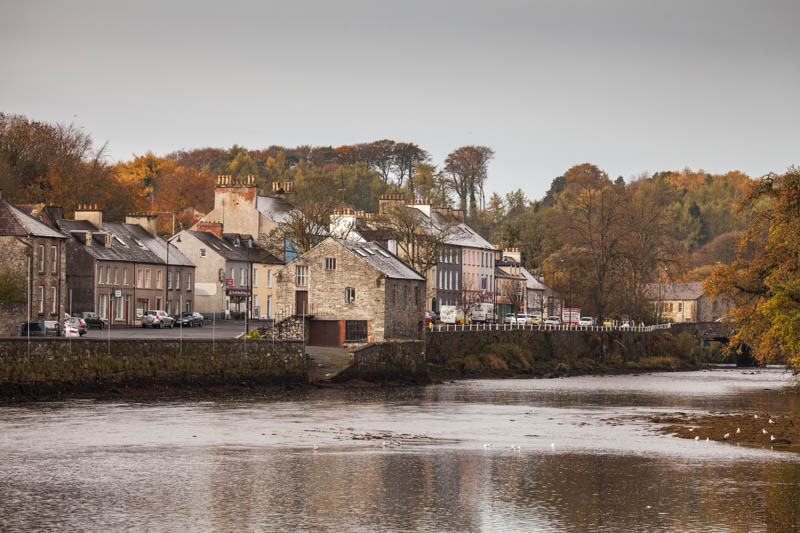 Below you can see crops at 100% magnification. The Sony appears sharper and has a slightly higher resolution. 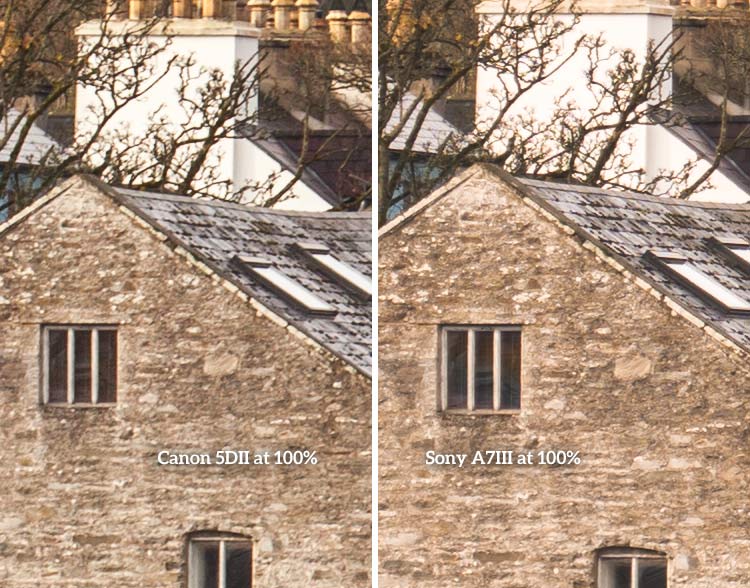 I bought the Sony more for its video capabilities than its still. That said, the RAW files are impressive and more than a few landscape photographers have ditched their Canons in favour of Sony's offerings. I suspect that the Sony will prove superior for Black & White work. As for colour? Too early to tell. I think Canon's colour is superior, but the tonal range is better on the Sony. It requires more work in Lightroom, but the camera and its profiles are tweakable, so the solution to the green cast may already exist in-camera.

One final comment: the Sony's menus are horrible. This is not really a camera that you can pick up and just go. It needs configuration. Take a look at this video to see what I mean. Blown out highlights, crunched shadows. All fixable through the menus, if you can find the right settings. I'm hoping that as I get used to it, the menus and configurations will get easier. At the moment though, the Canon is a much more useable camera.

Although I qualified as a graphic designer, and considered myself primarily a typographer, I was initially employed by LYIT to teach photography. At that time, the department occupied an old large Victorian building. Space wasn't an issue. We had a large photo studio and a good sized darkroom with 6 Durst enlargers and a wetspace for developing. We had a separate room for processing film. The setup was geared for black & white, and though it was possible to process and print colour, we didn't really have the capability to critically control processing temperature.

We were early adopters of digital technology, using a Nikon-Kodak DCS420, in 1994. This had a “whopping” 1.5 megapixel sensor and had a 2.6 crop factor compred to 35mm film. Nevertheless, when we moved to the main college campus and found ourselves severely restricted in space by comparison to the old facilities, a move to digital made good sense.

By this time Canon was the leader in the digital imaging, we have been using EOS cameras ever since. A side benefit is that they are fairly capable video cameras, providing a more “cinematic” image to more dedicated video cameras. Meanwhile, I had been using Pentax and Ricoh 35mm and Rolleiflex and Bronica medium-format cameras. I also kept a small darkroom at home. It was crude but functional.

I don't have a position on analog versus digital.

I resisted the move to digital for a long time. My experiences with the DCS420 (at €13000) and the numerous digital compacts available at the time convinced me that digital could not compare with analog photography. It was not until Canon released the 350d that my conviction wavered. It had 8 megapixels, but more importantly, it could shoot RAW files. Finally, digital cameras had a dynamic range that began to approach that of film, albeit with considerable post-processing. When Canon released the 5d Mark II, my conversion was complete.

Let's be clear, I'm not a digital evangelist. Film still has advantages over digital. Being grain based, it is resolution independent. Transparent (slide) film, exposed correctly, has incomparible dynamic range. There is also something special about seeing your silver or platinum image emerge before your eyes. Beyond that, the presence of a chemically produced image still has more depth and impact than a digitally printed one.

I don't have a position over which is better. Both have their advantages. Film remains a superior medium, but it is more exacting in exposure and in processing. Indeed, the market for processing film and making prints has drastically reduced. Perhaps, as we see with letterpress printing, we will see a renaissance in artisan chemical photoprinting.

For now, my work is entirely digital. The Pentaxes, Ricohs, Rolleiflex, Agfas and numerous other film cameras are gathering dust on the shelves. I will keep them, though. Who knows if they will see a second life.