I'll start this off with a free font. I'm close to finishing a much more comprehensive font which will be available in six weights, italics and Latin and Gaelic variants. The long term intention is to get this hosted on Google Fonts. 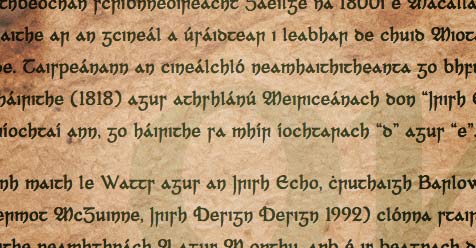 Macalla, meaning Echo, is a revival of Gaelic orthography of the 1800s. It is based on the type used in Transactions of the Ossianic Society, 1858. That unidentified typeface shows marked similarities to Watts in particular (1818) and an American redrawing for the Irish Echo (1881). There are some differences though, particularly in the lowercase “d” and “e”.

As well as Watts and the Irish Echo, similar historical fonts were created by Barlow, Christie, Fry and Figgins (Dermot McGuinne, Irish Type Design 1992). They are characterised by unusual uppercase A and M glyphs, which are almost blackletter in appearance.

As per the original, it's a single weight with no italics.

Bunbeg/Bun Beag is a serif font in six weights from light to heavy. It comes in two variants — Latin and Gaelic. The latin variant has full support for european diacritics and specialised letterforms, while the Gaelic supports seimhiús, fadas, and the insular Irish letterforms including Tt, Gg, long s and r and the ampersand.

At the moment it is almost complete, but is built as a single font using stylistic alternates to activate the Gaelic letterforms. As studies have shown that most users don't know of the existance of alternates, I'll separate them into two related fonts.

Check back for updates.